Rome, the ‘Eternal City’, was founded over 2,600 years ago, though the exact year is still debated amongst historians. The Romans believe their city was founded in 753BC, whilst many historians believe it was in 625 BC. With no written records documenting Rome’s origins, it isn’t surprising that Rome’s history of the time was based on a mixture of fact and mythology. 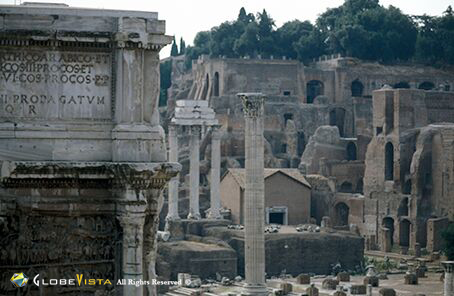 What is known for a fact is that prior to the arrival of the Greeks and Etruscans, Italy was a relatively primitive place, made up of tribes of Indo-European descent, who lived in small villages throughout the land. The Greeks and Etruscans helped sow the seeds of civilization in Italy during the 8th Century BC when they arrived on their shores in search of new lands to settle. The Greeks soon began forming independent cities and the Etruscans bought knowledge from the East, which would later influence Rome’s art and architecture.

From the 8th century, the Etruscan kings ruled Rome and they would do so until 509 BC when Rome expelled the tyrant, King Tarquin the Proud. The Romans created a council, known as the ‘senate’ and ruled, in what became known as the ‘Roman Republic’ (509BC). Each year the people would choose two senior lawyers (consuls) to head the government. The republic would last for 400 years. In 47 BC Julius Caesar, a successful general, attempted to destroy the republic by declaring himself dictator. This didn’t go so well at all, he was murdered in 44BC. Rome fell into years of civil war. In 27BC, Octavian, an army general, seized power in Rome and declared himself  ‘First Citizen’. He changed his name to Augustus and became the first emperor of Rome. Under his rule, he brought peace back to Rome (ending the Civil War) and introduced new laws to the land.

Things You May Not Know

Some of the fingers missing from the statues in Piazza Navona were taken as souvenirs by Allied forces during the Liberation of Italy, in 1870.

The Quirinal Palace was once the papal summer residence. Located on the highest hill in Rome, it was the perfect refuge for the pope to avoid the stifling heat and the ravages of disease, such as malaria, during the summer months.

Located 4.6m beneath the city of Rome is a 400m long secret tunnel. The tunnel runs under the Roman Forum and emerges near the Colosseum. The tunnel is connected to a maze of smaller tunnels which lead from the former office of Mussolini, in the Palazzo Venezia . The tunnel is believed to have been built as an escape route for the Fascist leader, during World War II.

All gladiators killed in the Colosseum were removed through the porta libitina (Gate of Executions).

Inside Trajan’s Column is a 185 step, spiral staircase leading to a viewing platform.

The great fire of Rome in AD 64, left two thirds of the city destroyed and became the catalyst for the Persecution of Christians.

Trajan’s Market was the world’s first shopping mall. Located on the slopes of Quirinal Hill it had over 150 specialty shops.

The oldest symbol representing a word is “&” (ampersand) and it was believed (though not proven) to have been invented in Rome by a slave known as Marcus Tullius in 63BC. Tullius was a slave and secretary to Ciero (106BC – 43BC) who was a statesman and philosopher in ancient Rome. Tullius had the arduous task of transcribing Cicero’s works and by 63BC he had invented his own system of shorthand know as “Tironian notes”. Ampersand became the symbol for the word used to connect words “et” (and).

When the construction of Il Vittoriano commenced in 1885, many Roman ruins and medieval churches were demolished to make way for the white marble monument.

Roman engineers were the first to design public toilets and they were just that, public. People had to sit together on rows of seats.

The city of Rome was once surrounded by 50km of stone walls to protect it from attack. To enter the city you had to use one of 37 gates, which were guarded by soldiers and watchmen.

In Ancient Rome, wealthy citizens had underfloor central heating. The heat was supplied by a wood-burning furnace under the house. The heat would travel through channels that were built beneath the floor and the walls. Slaves were used for chopping the wood, stock the furnace and fan the fire.

The hole (oculus) in the centre of the dome of the Pantheon is the only source of light for the building.

The cats of the colosseum number over 200 and are protected under Roman Law.