The Colosseum (Coliseum) of Rome, or as it was originally known, Amphitheatrum Flavium, was originally constructed by Vespasian in AD 72, inaugurated by Titus in AD 80 and completed by Domitian in AD 82. This great marble and the brick-faced concrete amphitheater was built on the site of a lake, below Nero’s Palace (Domus Aurea), following the devastating great fire of Rome. 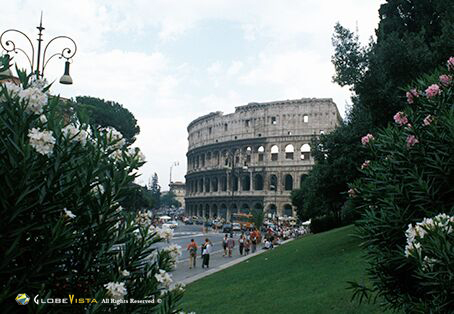 It was the largest amphitheater built in the Roman Empire and was designed to hold up to 50, 000 spectators. The facade featured three tiers of arches and an attic storey, making the building about 13 stories high. Each tier featured Ionic, Doric and Corinthian columns. The name of the arena was believed to be derived from a bronze colossus (40m statue) of Nero, which was located nearby. The head of the statue was later re-modeled, to depict succeeding emperors. At some stage, the statue disappeared altogether, rumoured to have been melted down. Evidence of the base can still be found if you wander between the Colosseum and the Temple of Roma and Venus.

The Colosseum is most remembered for the “blood sports” that took place behind its walls. Gladiators, slaves, criminals, Christians and wild animals were used in “battles to the death” contests held in the arena. Exotic animals were imported mainly from Africa and were concealed in cages and pens under the floor. High entrances were built to accommodate the larger animals such as giraffes and elephants entering the Colosseum. It is believed that the extinction of lions from North Africa was due largely to the Romans hunting them for gladiator shows. Occasionally the arena would be flooded and ships bought in to re-enacted naval battles. 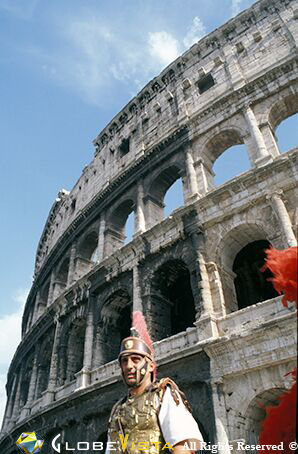 Seating was important in the colosseum. The lower tiers of the Colosseum were reserved for emperors and senators with the higher tiers restricted to the masses. The first level seating or podium was reserved for the Roman senators. You can see some of the senator’s names still carved into some of the seats. Colosseum, Rome The emperor’s seating was also located on this level, though he was in a cushioned marble box seat. The next level was known as the maenianum primum, which was reserved for all the Roman aristocrats who were not in the senate. The third level, known as maenianum secundum, was divided into three sections, the lower was for wealthy citizens, the upper for the poor and an additional wooden section which was standing room for women only. The spectators were seated around a central elliptical arena which meant the gladiators couldn’t cower in the corners and the audience was guaranteed a good view of the action.

Below the arena was a tunneled underground section, where the gladiators and animals were held. This area was added around AD 74. The wooden floor had numerous trap doors and hinged platforms to allow for easy access to the animals and scenery. Animals and gladiators would be winched up from underground, with the aid of pulleys and counterweights. The entire base of the Colosseum covered an area of some 6 acres. There were 80 entrances/exits for the spectators at ground level to the arena. Nearby the Colosseum were various gladiator schools and training arenas. The Spoliarium was where the bodies of the unfortunate losing gladiators were taken and disposed of. 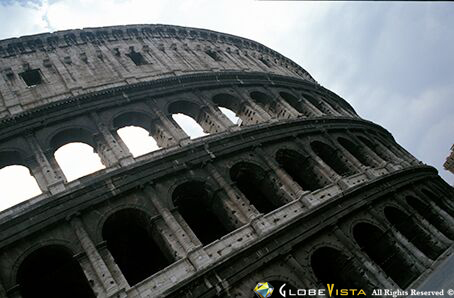 Cleaning Up Their Act

In 404 AD battles between gladiators were banned, due mainly to the rise of Christianity. By 523 the last known games were held in the arena.

With the Fall of the Empire and a series of severe earthquakes, the Colosseum fell into ruins. During the middle ages, the Frangipani family converted the arena into a fortress but that didn’t last long and eventually, it was plundered for its stone & marble. Some of the marble used in the construction of St Peter’s Basilica came from the Colosseum. It wasn’t until the Anglo-Saxon monk Bede prophecized “Rome will stand as long as the Colosseum stands; if the Colosseum falls, Rome will fall, and if Rome perishes the world will end.” that the Romans began to see the amphitheater in a different light. Finally, in 1749, Pope Benedict the XIV declared the Colosseum off bounds to anymore plundering. He consecrated the building to the Passion of Christ, declaring it sanctified by the blood of Christian martyrs. A bronze cross was erected in the arena in honour of the Christian who lost their lives in the pit.

In 2005, an accidental discovery by archaeologists unearthed what is believed to be the ancient Roman brickworks that were responsible for producing bricks for the Colosseum, Pantheon and other great Roman monuments. The site was found 80km north of Rome, near the village of Bomarzo and close to the river Tiber. The dig so far has uncovered two furnaces and thousands of bricks & roof tiles.

Today the Colosseum stands as a reminder of Rome’s brutal past and as a symbol of hope and redemption. In 2000, following a series of protests against capital punishment a decision was made by local authorities to change the color of the Colosseum’s nighttime lighting from white to gold whenever someone condemned to death, anywhere around the world, has their sentence commuted. 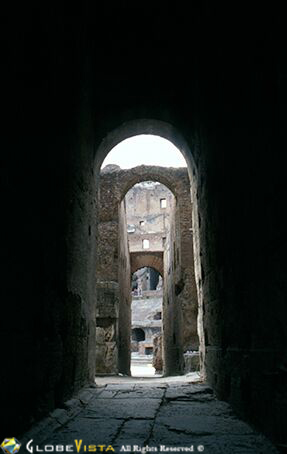 Cats of the Colosseum

The cats of the colosseum have been a popular side attraction to one of the most famous monuments in history even though they represent only a small colony of feral cats in the city of Rome. There are around 200 cats living in the colosseum, true gladiators of the feline world. Sometimes you’ll spot one zipping through an arch or you may just glimpse a tail as it disappears into the various nooks and crannies of the ruins. Click here for more about the cats of the colosseum.

Interesting Facts About The Colosseum

It is believed the high entrances were built to allow the larger animals, such as the elephants and giraffes easy access into the arena.

Charon was the name given to the main referee and was named in honour of the underworld ferryman in Greek mythology.

As if they hadn’t suffered enough before dead gladiators are removed from the arena they are branded with a hot iron by the referee.

All dead gladiators are removed through the porta libitina (Gate of Executions).

Public executions were also held in the arena at noon, this usually involved the poor victim being thrown to the wild animals.

A severely wounded or defeated gladiator could ask the “editor” to spare his life. This usually resulted in the “editor” asking the crowd to decide. Thumbs up was to live, thumbs down was to die.

There were over 20 different types of gladiators all equipped with different weapons and attire.

In AD80 following a 100 day festival in honour of the colosseum’s opening over 5,000 animals were killed.